Curcumin BioBDMC™ is a patented technology delivered by a novel research-supported mechanism that is recently peer-reviewed and published. Curcumin extracts typically deliver a curcuminoid proportion as: diferuloylmethane (curcumin I) 75–80%; demethoxycurcumin (DMC — curcumin II) 9-12%; and bisdemethoxycurcumin (BDMC — curcumin III) 0.2–3%. Regular curcumin extracts (even the 95% variation) maximally delivers 3% of this BDMC activity and therefore cannot inhibit a key protein (MSK1)
that regulates inflammatory cytokine transcription (generation). The patented Curcumin BioBDMC30™ is engineered to deliver a minimum 30% concentration of these MSK1-inhibiting curcuminoids.
Health Canada-approved claims for the Canadian market: Relief from pain, swelling, and other common ailments associated with inflammation.

Regular Curcumin of many types tested and displayed in the same peer-reviewed research cannot inhibit (stop) this protein (MSK1).

Curcumin BioBDMC™ inhibits two key proteins (MSK1 and NF-kB) while regular curcumin 95% only inhibits one of these (NF-kB) as is commonly known to be its anti-inflammatory mechanism.
​
Physical RESULT of this additive Curcumin BioBDMC pharmacology:
​

The True Nature of Curcumins

The 3 Curcumin Analogs Comprising the Curcumin

"I've been on these Curcumin BioBDMC Capsules for over a year, it's been working wonders on the Osteoarthritis in my knees injuries from MVA and other injuries. Sometimes I need to double my dose after I have exerted too much on my knees. Your curcumin capsules help tremendously!"

Clearing the Path to Potent Longevity

Curcumin displays strong anti-inflammatory potential in the entire body, and in the near future it will be recognized as one of the vital anti-aging nutrients. It plays a core role in any health program. I’ve been using extremely high doses of curcumin (turmeric 95% curcuminoids) for various reasons, which you’ll see disclosed throughout this book series.

Curcuminoids, extracted from turmeric, contribute a potent defense of DNA. Studies have compared its anti-inflammatory potential and

anti-cancer properties against common pharmaceutical therapies to reveal, in some cases, better results and in other cases conclusive synergistic value. Have pharmaceutical companies reported on this? No, they haven’t. The incredible facts rising out of this research reveal that curcumin, unlike a common nonsteroidal anti-inflammatory drug (NSAID), doesn’t induce gastrointestinal, liver, and/or kidney toxicity.

Having read reports of the potential of curcuminoids to down-regulate

cyclo-oxygenase-enzyme activity and eicosanoid-hormone biosynthesis, I was confident some time ago that they regulated gene expression of the enzymes involved in eicosanoid-hormone production, much like the protective NF-kappa-B gene influence of alpha lipoic acid. In this way curcuminoids prevent the overexpression of genes involved in the immune and inflammatory response.

After ongoing, relentless search, I found my answer. Curcumin had

been investigated for its ability to suppress the activation of HIV to the status of AIDS. In a 1993 Harvard University study it was demonstrated that curcumin inhibited the expression of a gene in the DNA of the virus. This gene was responsible for turning on HIV to initiate the assault on the body. Recently, through this historical work, curcumin has been shown to block the activation of NF-kappa-B. Not only is curcumin a powerful HIV inhibitor, it can be justifiably applied as part of the anti-aging and anti-inflammatory program with scientific proof that it works powerfully alongside or independent of alpha lipoic acid.  This insight, was the impetus for my push to study curcuminoids exclusively and define with more accuracy how they can be used and even engineered to increase their potential to bring general health benefits and disease treatment. 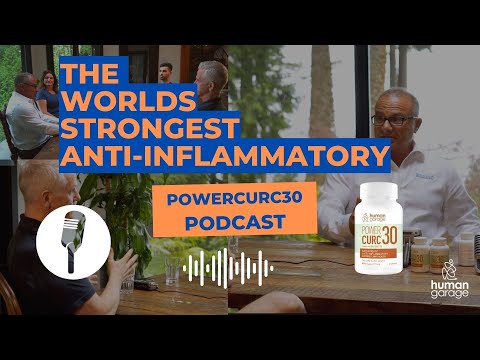 Worlds Strongest Anti-Inflammatory PowerCurc30 Podcast #Curcumin We had the opportunity to talk about inflammation and the power behind...

Peripheral neuropathy can be a nagging painful experience the cause of which can be more than just diabetes. It can be caused by cancer,...

Whether we are on the right paths or not, the courses we take are the ones we’ve chosen. If we’re not satisfied with the state of...